Adaptive Bitrate (ABR) streaming is a delivery technology designed to provide consistent, high-quality viewing in situations where bandwidth may fluctuate, and where viewers may be on a wide range of devices - mobile, tablet or OTT. Growth of mobile video consumption and popularity of VOD services (Netflix, Disney+ or Amazon) relies on ability to create both, HLS and MPEG-DASH video at a scale.

ABR streaming addresses these issues by encoding content into multiple variants, each potentially a different bit rate, frame size and/or frame rate. These variants are combined into a single package that represents the original content. ABR players switch between variants depending upon the device and available bandwidth, to ensure consistent high-quality playback.

For example, a single ABR package might include six variants, each encoded at progressively higher bit rates. The player will adaptively switch between low bit rates and high bit rates, depending upon the connectivity of the device. 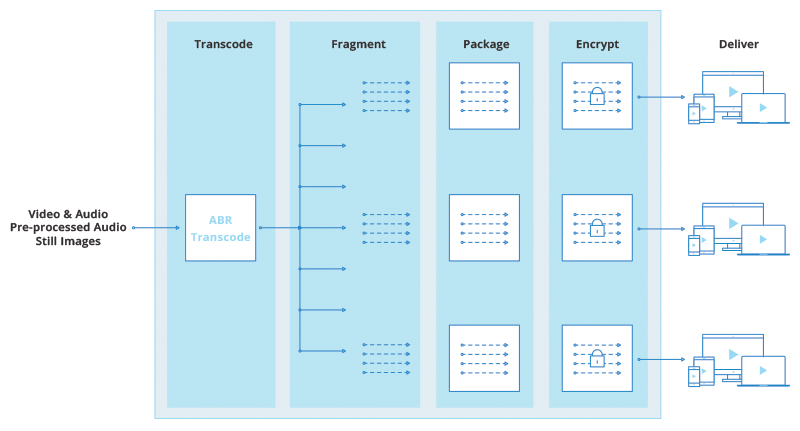 During playback, video and audio are delivered via HTTP in small segments, typically between 3 and 10 seconds in length. Each content package includes multiple variants, and each variant may include many segments. The player is provided with a package manifest file outlining which variants are available and the location of the segments for each variant.

The video player requests and downloads a segment from a variant. While the segment is played, the connection speed is monitored, and the player may opt to switch variants, either increasing or decreasing the video bit rate based upon the connection speed. Players may also choose variants with different frame sizes or frame rates to optimize the visual experience for the device. This adaptive behavior is what ensures consistent playback regardless of connection speed or device.

Apple HLS (HTTP Live Streaming) and MPEG-DASH (Dynamic Adaptive Streaming over HTTP) are currently two most common ABR streaming technologies supported by vast majority of devices. And they are both supported in Telestream Cloud.

HLS is media streaming protocol developed by Apple for iOS, Apple TV and OS X that over time has gained support on number of other platforms due to its popularity. It is natively supported on OSX, iOS, Android 4.1+ and Windows 10.

HLS content can be encrypted with AES-128 using an existing or randomly generated key. For an extra layer of encryption keys can be served over SSL.

MPEG DASH works in principle just like HLS, but is codec agnostic so it’s not limited to H.264 only but can also use H.265 or VP9. It is also the first adaptive bit rate solution that has become an international standard. Stream metadata is described by MPD files (Media Presentation Description) that can be organized in different ways depending on the use case.

In various forms MPEG-DASH is supported by all major browsers and vast majority of Android devices (from smartphones to TVs).

Preparing ABR content involves several steps. First, the desired packaging and variants or layer structures need to be identified. Next, content must be encoded, checked for quality, packaged, encrypted and delivered.

Packaging choice is generally driven by what devices must be supported. Not every device supports players for every type of ABR streaming technology. As a result, one should catalogue both the devices and the players that will be supported. iOS and Android, which dominate the current devices landscape, use either HLS or MPEG-DASH respectively. The ability to re-use encoded H.264 streams across multiple package types is key to avoid having to re-encode the same bit rates simply to package the video differently.

The selection of optimal bit rates, frame sizes and frame resolutions will vary depending upon device types, connection types and encoding technology. Apple provides excellent starting points with suggested profiles suitable for their ecosystems. However, practically speaking, the entire catalogue of devices, expected network connections and network costs must be considered when designing layers.

Updated over 2 years ago