The ‘Lifespan’ of the output of an Action defines how long the material generated by that action should persist. Control over the Lifespan is provided so that workflows can optionally generate Transient material (i.e.: material which exists only to server and input to a downstream action).

As an example, consider the workflow:

In this scenario, a user has created a workflow which will accept some incoming CML, perform the requisite transformation on that CML and ultimately produce a Cable compliant version (which is the desired end-result).

In this scenario, the output of the Conform action (the nickname: Transient) is ONLY useful as an input to the IPTV Flip action. The ultimate desire of the user with respect to this workflow was to have a Cable compliant version of the material defined by the incoming CML produced. As such, the intermediary file that is generated during the execution of this workflow is not useful once this workflow has completed execution. It only has value as an input to the IPTV Flip action.

A media version with this characteristic/property is referred to as being Transient.

Contrast this to the output of the IPTV Flip action. This action emits the version: Cable ; this is the version that the user wishes to do something with, or to persist for an indefinite amount of time. This version would be referred to as Permanent.

Part of the configuration of this workflow is the indication that the output of the IPTV Flip action should be ‘permanent’ (i.e.: it is desired for this output to exist beyond the lifetime of the job).

The user/creator of this workflow can define the ‘Lifespan’ of the output using the following Context Menu option: 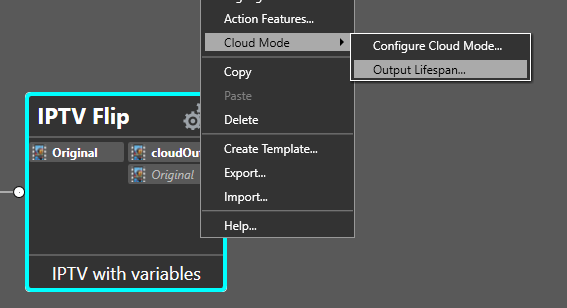 The ‘Output Lifespan…’ option brings up the following dialog. This dialog allows the user to specify the desired lifespan of the OUTPUT (and all OUTPUTS) of this action: 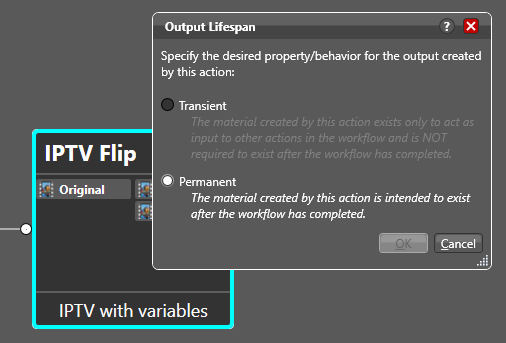 Outputs which are marked as TRANSIENT shall be deleted once a job is completed when this workflow is hosted at Telestream Cloud.